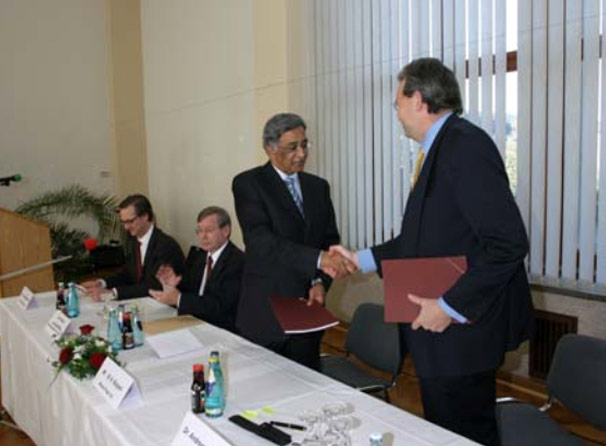 CDP AT belongs to the renowned CDP group and is a significant player in Europe in the area of aluminium forged components used in passenger cars and other automotive applications.

In an all cash deal, Bharat Forge has acquired 100% ownership interest in CDP AT, with immediate effect.

The transaction has been concluded at the enterprise value of Euro ( €) 6.30 Million. This is funded by way of Equity of € 3.80 Million and Non Recourse debt of € 2.50 Million. Out of the total Equity, € 2.00 Million is being contributed by BFL in phased manner over six months, and the balance of € 1.80 Million is being contributed out of the internal cash accruals of CDP Bharat Forge GmbH and CDP AT.

While announcing the acquisition, Mr B N Kalyani, Chairman & Managing Director, Bharat Forge said, “The CDP AT acquisition is an important part of Bharat Forge’s long term business strategy. The acquisition marks the entry of the company into the aluminium auto-
component business.”

He further added, “The acquisition will significantly strengthen the company’s position in the global Passenger Car & Chassis Component business and is a step towards attaining global leadership. CDP AT will enhance Bharat Forge’s product range & technical capabilities, in both steel and aluminium”. This would enable BFL’s existing customers to source complete spectrum of forged auto components across steel & aluminim segments from a single source. It would also enable BFL to enlarge its product offerings for a potential value added systems & assembly market.

Established in 1997, CDP AT is located at Brand-Erbisdorf, near Dresden, an area emerging as a major automotive hub with new plants being set up by Porsche and BMW. It is a profitable company with an annual turnover of over Rs 200 crores ( € 35 Million) and a staff complement of 130 employees. CDP AT has developed and patented its technology of aluminium forgings in Germany. Its customers include major automobile manufacturers such as BMW, Audi, Volkswagen, Ford, etc.

Aluminium is progressively becoming the preferred material for specialized hi-end automotive applications due to its significantly lighter weight and consequent advantages of fuel efficiency. Bharat Forge along with its subsidiary CDP Bharat Forge has leadership position in steel forgings for commercial vehicle and passenger car segment and the acquisition of CDP AT will widen the product offering of the company.

About a year ago, Bharat Forge acquired the German operations of Carl Dan Peddinghaus GmbH & Co. KG (now renamed CDP Bharat Forge GmbH). This company had an annual turnover of Rs 680 crores and about 770 employees with plants in Ennepetal and Daun. The company has further invested about Rs. 30 Crores ( € 5 million) in its German plants and has generated additional employment for 40 employees after its acquisition by Bharat Forge. In first nine months of operations of CDP Bharat Forge GmbH, the sales and PBT have witnessed significant improvement to Rs 561 crores and Rs 40 crores respectively.

Bharat Forge Ltd. is the flagship company of the over $ 1 billion Kalyani Group, which has significant presence in the key sectors of the Indian economy. Established in early 1960’s, Bharat Forge Limited (BFL) today is a global corporation with world-class engineering capabilities, state-of- the-art manufacturing facilities and a global customer base. It has the world’s largest single location forging capacity and is one of the largest and most technologically advanced commercial forging companies in the world. BFL is internationally respected for its cutting edge technology and established quality processes and capabilities developed over the years.